Download our Petland App today for information on your local Petland's Available Pets and Pet Supplies. All at the tips of your fingers! 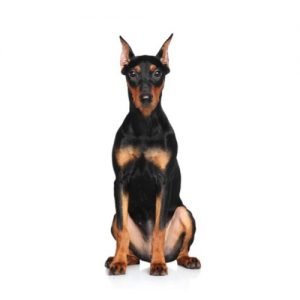 The German Pinscher, also known as Deutsche pinscher or Standard Pinscher, is a type of pinscher that originated from Germany. It is a most sought- after dog due to its beauty, elegant appearance, intelligence, versatility, and temperament. They are one of the smaller breeds in the working-dog group. The German Pinscher is an excellent guard dog. Discover more about our German Pinscher puppies for sale below!

The German Pinscher originated in southern Germany around the 18th century when it was first entered into the German records.

It is known to have originated as a result of crossbreeding between the German Bibarhund (from the 1200s) and Tanner (from the 1300s).

This breed became close to extinction after the second world war, but for the help of Werner Jung; a West German, who single-handedly smuggled a black and red female from East Germany and bred her with about four oversized Miniature Pinscher males and one Miniature female to reestablish the breed.

German Pinschers were imported into the United States in the late 1970s and early 1980s and its population has steadily grown, even though slowly since the breed was accepted into the American Kennel Club in the year 2003.

There are however several factors that could affect its temperatures such as heredity, training, and socialization. They are sometimes referred to as “do-all” dogs because of their ability to learn quickly. These temperaments make these breed a good guard dog and the devoted and loving family dog.

German Pinscher can handle most climates. They love being outside and can get into trouble, so be sure to have a high fence or keep a close eye on them.

German Pinscher requires several hours of exercise daily to avoid potential behavior problems. If left for long periods with nothing to challenge him, he becomes restless or destructive and will find “projects” to do, like chewing up your shoes or digging under your garden fence. If you are a runner, you will find the perfect running partner in the German Pinscher.

The German Pinscher is highly trainable. They are willing learners, thus making grooming fairly easy. Their short, dense coat needs brushing at least once a week to remove dead hair.

They respond best to consistent and persuasive commands. Puppies require early training and frequent socialization to prevent them from being wary, distant or aloof around strangers and excessively dominant which may tend into aggressiveness.

Although the behavior and temperament of the German Pinscher can be shaped by training. However, if you want to avoid some negative traits in a puppy, then you must choose the right puppy and the right breeder.

If you also want to avoid some negative traits in an adult German Pinscher, then you must choose an adult dog from a rescue group or an animal shelter.

In all, the most guaranteed way to avoid negative traits in a German Pinscher is to train it to respect you by providing enough exercise, mental stimulation, and socialization.

The unregulated breeders who are selling outside of the USDA regulations and without a license are what we consider to be “Puppy Mills.” We are committed to offering German Pinscher puppies who will grow up to become important members of your family. We only purchase puppies from the very best sources, and we stand behind every puppy we sell.

How do I care for a German Pinscher?

You can care for a German Pinscher by brushing her coat with a cloth or rubber mitt as needed, at least every week. You can also brush their teeth at least twice a week to remove tartar buildup and the bacteria that lurk in it.

What is German Pinschers life expectancy?

The German Pinscher has an average lifespan of 12-14 years

What is the diet plan for a German Pinscher?

A German Pinscher can be fed with high-quality commercial dog food. Real meat, bone and organ meat (liver, heart, kidney) is the best food for your dog. Also, fresh fruits and fresh vegetables are very good to add to their diet plan but should be in small quantities. Make sure to feed your dog the best quality dog food; one that not only agrees with your dog but that you can afford.

What is the average size of a German Pinscher?

What group is the German Pinscher in?

The German Pinscher is categorized in the “Working dog group”.

German Pinschers do not have a smell.

No, German Pinschers are not known to be hypoallergenic.

No. Although they share certain similarities in their standards, they are two distinct breeds.

Absolutely yes! They make great watchdogs. They are good with children, especially older children from ages 9 and above. They are suspicious of strangers. They have a strong vermin-hunting instinct so they may not be suitable for homes with small pets such as rodents.

What are the common health problems of German Pinschers?

Although the German Pinschers are generally a healthy breed, one should look out for certain health problems such as cataract, thyroid disorder, elbow dysplasia, von Willebrand disease, and cardiac disease.